I finally finished the project I was working on, making a mini-game/visual novel using Ren'py. Had to delete a scene which was too complicated to code but the game works fine now, it should be bug-free but do report if something goes wrong your side.
Please leave feedback at the bottom. I am thinking of doing a more evolved game in the future, with quest and inventory. This is just a test, it focuses just on the sex and there is zero character development...

Please feel free to distribute on any forum where you think it might be appropriate and upload it to fileboom, rapidgator or whatever if you have a premium account.)
EDIT: It's OK, the game is already all over the internet less than 24hrs after its release...

Here are the links for the game:

Here is a script to make the game much easier as far as the clicking is concerned (PC version):

Script
(Instruction: Extract and replace the script.rpy and script.rpyc files in the "game" folder.) 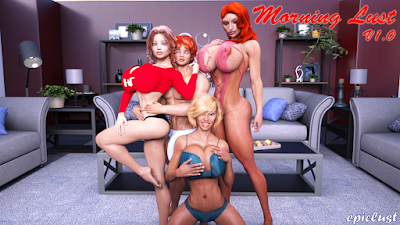